My cat is mean! She is spiteful! But is she? Compulsive behaviors part 1 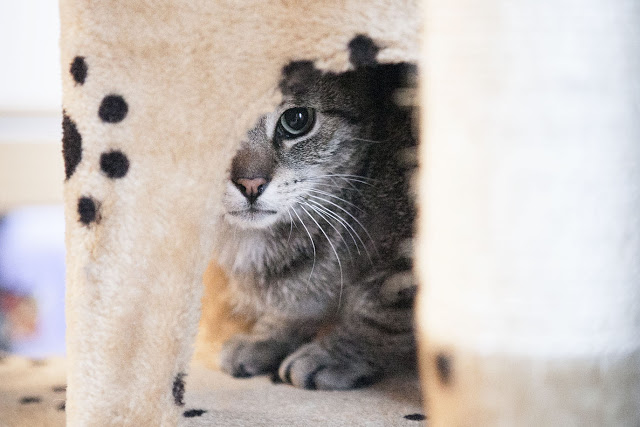 Here is the story of Frania, one of the cats I gave up for adoption. I always try to understand and explain everything using examples so I decided to write about cats’ compulsive – destructive behaviors on Frania’s example. As this is quite a complex topic and I do not want to bore you or discourage you from reading I will divide it into few posts.
One day I got a phone call from Iza, a girl who adopted Frania and Fiona – an interesting cat duet. One stable but very fearful and the second behaving like a child with crazy ideas ending in losing the end of the tail or pulling a paw from the joint socket; both of them loved very much by their owners. Iza called with a problem that came up with Frania. She described the situation as follows: “So in our house when we go to sleep we leave the bedroom door open. Fiona comes to our bed and Frania sleeps on the shelf or on the desk in the bedroom although recently she prefers a shelf in the closet (initially Frania also slept in the bed with us). Fiona sleeps throughout the night but Frania wakes up every night around 3-4am and starts making mischief: she knocks things off the shelves, knocks things over, bites on flowers, digs in the flower pots and squeaks. The bedroom door stays open at all times. While we eat breakfast she keeps on digging in the soil. Also very often when we come back from work the soil from the flower pots is all over the floor. Our reactions to these behaviors differ: at the beginning we yelled at her or said something, now we just clean and go back to sleep. When she squeaked we embraced her, stroked her and took her to bed to Fiona (Fiona does not react to Frania’s squeaks at all). Frania doesn’t listen to us: for example we clap when cats jump on the table and Fiona immediately gets down and does not get on it again but Frania does not care, just looks at us and does not react. Also Frania scratches the couch, she has her scratching post but choses the couch instead. It’s like they switched characters: Fiona still has crazy ideas and mishaps but she is funny, well-behaved, does not romp around and loves to cuddle. Frania is driving us crazy: she is mean and we must have made some mistake because she became very spiteful. She cuddles very rarely and it seems the bond between us is very weak although everything was fine at the beginning. Here is Frania’s picture soon after her adoption.”

So what happened that Frania changed so much?

I was sitting and thinking about Frania for a while and after looking through some literature here is what I came up with:

In my opinion Frania’s behavior falls under the group of obsessive-compulsive, destructive and undesired behaviors. Knowing Frania I can tell that her behaviors are in 99% stress related – one time or long term stress. If she was behaving differently at the beginning it means change of the home was not the factor. It would be good if you as her owners sat down and thought of things that might cause her stress. Think of the exact moment her behavior changed…maybe it is connected with somebody’s visit in the house? Do you happen to hear any high pitched noises in the house? Does Frania always have unlimited access to scratching post and the litter box? Stress in cats can be caused by many various things most of which we do not even notice so it is important to think of even the most trivial factors. I remember that in the temporary home Frania used to bite on cardboard – all she could find – and cleaned herself more than she should. Does she have any places on her body with none or very thin fur? I remember when Frania was in a temporary house with another cat, Lilka, she used to bite on cardboard and clean herself obsessively – these behaviors stopped right after Lilka was adopted and left the house. Most likely presence of Lilka was the stress factor for Frania although the cats did not actually spend time together as they were kept in two different rooms.
So the following should be done: we need to find and eliminate the factors causing stress, move her play time to evenings, make her stop scratching the furniture and play on the scratching post instead, stop her from climbing furniture and knocking things over and stop her from biting on cardboard.

In general I think that eliminating the stress factors is the best solution but sometimes these factors are things we need to do and we simply cannot eliminate them, which complicates the situation. The first rule, which is also the most difficult to follow, is not to punish cats for bad behaviors but to praise them for the good ones. I think that the initial yelling – even if it was not very loud or frightening could have deepened and/or speeded up her undesired behaviors. So let’s make sure not to do it again because cats do not know the word “no.” Let’s imagine a cat is scratching a piece of furniture. Suddenly from another room comes a person running and screaming. Cat does not understand the shouts but she sorts of likes them because somebody seems to be chasing her so she can run around…looks like a good fun. Another situation: a cat jumps up on a table top and the owner takes a spray bottle and sprays water right in the cat’s nose – now the owner is being associated with pain so something bad and the perception will deepen if the practice is repeated. The cat-man relation is getting tense and absent owner syndrome appears, which means that cat cannot do certain things when the man is present but can do whatever she wants when the owner is gone. So how to deal with the unwanted behaviors. The secret is, as I already said earlier, not to punish for bad but praise for good behavior. It is also important to lessen the cat’s satisfaction from performing the unwanted behavior to make it less attractive for example cover the furniture with bubble wrap or double sided tape so when cat tries to scratch the furniture she will not experience the pleasant feeling she used to but instead some displeasing crush which is supposed to discourage the behavior and more importantly this unpleasant feeling is not associated with the owner.

I know that stopping ourselves from reacting is very difficult but it is necessary to build a harmonious relationship with your cat which instead of creating worries and sleepless night starts being the best relationship in your life and I think that reward is worth it. We can also try to distract the cat to prevent the bad behavior from happening, like distracting a misbehaving child. However, here we need to be very watchful as we need to divert cat’s attention before she misbehaves. Do not try to attract her with a toy after she is already on the table top because she will learn that jumping on the table means there is going to be fun and she will do it again. We need to find the moment when the cat is getting ready to jump and then catch her attention with something else for example a toy – this way she will not associate these two actions and will stop jumping on the table. Until now we are working with Iza to eliminate the unwanted behaviors. Frania started improving but she needs more time. I will write about Frania’s progress soon.

Layette for a cat – 9 most important items 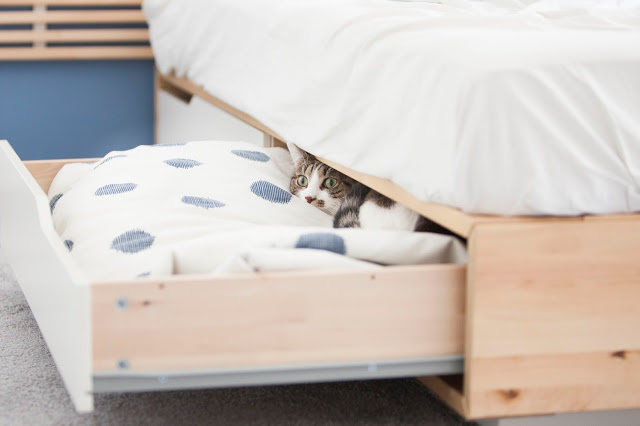